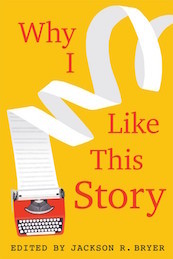 I'm pleased to say that I have a piece in Why I Like This Story, edited by Jackson R. Bryer (Camden House, June 2019): a collection of essays by writers who were asked to describe why a favorite short story has moved them and influenced them. Those writing essays include Annie Proulx, Andrea Barrett, Ann Beattie, Alan Cheuse, Joyce Kornblatt, Clarence Major, Herbert Gold, William Gass, Mako Yoshikawa, and others. I chose Katherine Anne Porter's "The Jilting of Granny Weatherall," a story that knocked me out the first time I read it. I love Porter's clear-eyed, unflinching depiction of this indomitable woman as she confronts her life in the face of death. The story is a marvel of characterization, and in its own way comes as close as fiction can to capturing that ephemeral internal state we call consciousness.

Excerpts from the essay:

"An old woman lies dying. Her daughters, her memories, the chipped flint and bone of her life, appear to her and then disappear, like glimpses of the past, like false promises."

"At length the reader comes to the most private hurt of all, enshrined in her still-sharp memory, her being left at the altar as a young bride-to-be."

"At the very center of the story lies a hole, a vacuum, a nothingness. The strongest metaphor for this throughout the piece is George, the man who left, the bridegroom who wasn't there."

Available from Camden House, an imprint of Boydell and Brewer (boydellandbrewer.com).